To say I was a little intrigued would be an understatement with respect to the claim detailed in Encounter #7 of an alleged “Thylacine skin” displayed in a store near Paluma, Queensland. I was interested to know if I could track down any further information on this amazing claim, as stories of these animals inhabiting North Queensland do appear from time to time. Firstly, I needed to get as much information as I could from the original witness if possible, as I did not collect the original details of the story. If there was truth to this claim, I also needed to prove that the store actually existed in the described location.

Fortunately I was able to track down the original witness of the displayed skin, who will remain anonymous at their request. They were able to offer further details of the location and skin description. I provide the description in their own words.

“The one at Paluma was shot by a Mr Smith. I knew his sons as timber cutters. The thylacine had gotten into the chook house and was killing chooks when it was shot. They skinned the animal after taking photos of it, but I’ve never seen the photos. However I did see the skin on the wall of the old store at the foot of the Paluma range turnoff, back in the 60’s. The stripes were very faint. It could have been a dog except for a very thick tail.”

So looking at this information, there were some very interesting points raised. Firstly, a recollection of the skin displaying “stripes” as well as the claim of the animal displaying a “thick tail”. The claim of photos being taken of the animal was also of great interest. Further added was a potential location of the store, so I made some enquiries with local historical groups in the area.

With several roadside stores having existed in the area from many decades ago, one particular store did fit the location described which was located at the turn-off to the Paluma range. From what I could ascertain, the store was known as the “Mt Spec Roadhouse” and had succumbed to fire many years ago. Prior to this, the Mt Spec Roadhouse had also been rebuilt from previous fires many years earlier. Views from Google Earth now seem to show a homestead on the location.

With the information regarding a “Smith” family from the area having allegedly shot the animal, I was also keen to track down any further information from any family remaining that may have a memory of this event. I was fortunate enough to be able to track down a relative of the Smith family associated with the shooting of this animal. I provide the following description in their own words.

“Yes Dad [Husband of Witness] does remember the quoll being shot, he was a young lad when Pop saw it killing their chooks, it killed most of them in one night, so he shot it. It was a large spotted quoll”

Regarding confirmation of the store location, the family member writes:

“it was in the shop at the bottom of the range, the shop was there before I went up to Paluma in 1964“

Interestingly, another family member also indicated an additional location where the skin was displayed:

Also, regarding the fur pattern, I was interested to know if the animal fitted the description of a spotted quoll as claimed, and if any of the alleged stripes could be recalled. The family member writes:

“He also thinks it had both markings, faint stripes on the hind and spots on the front which is why they called them Tiger Quolls“

So, according to the family, the animal was just a large spotted-tail Quoll, also known as a Tiger Quoll, which would have been the most likely animal candidate if I had to guess. I must admit that this information left me somewhat disappointed, but still curious as to why two separate witnesses seem to recall stripes being present on the skin. Also, the Tiger Quoll (Dasyurus maculatus) is distinctly spotted, and as far as photographic evidence seems to portray does not display a striped pattern.

Today, Quolls are said to no longer inhabit the Paluma area, though this was not always the case. As printed in the Townsville Daily Bulletin on 2nd May 1940, a photo was displayed of a large “native cat” that was shot at Mount Spec after killing a total of 52 fowl over three separate events. The animal appears clearly to be a large spotted tail Quoll measuring 33 1/2 inches from head to tail. It is quite possible that this could have even been the alleged photograph taken of the animal that was subsequently skinned and displayed at the Mt Spec Roadhouse, though this cannot be confirmed. One feature that is definitely clear about this animal, is that it is distinctly “spotted”.

Another point worth investigating was whether there is any history of sightings in the area of unknown “striped” animals. An interesting case was noted from the book “A History of the Timber Industry covering Kirrama Range, Mt Spec, Mt Fox, Herbert River” where the author recalls their own sighting in the Mt Spec area.

“In 1947 whilst returning to camp one evening on the Swamp Creek road near the chinaman quarry not far from Birthday Creek camp, silhouetted in the headlights of my truck was an animal. The animal crossed the road, turned its head and looked at me – I said to myself “That’s a Tasmanian Tiger”

So now I was left with more questions than answers. I am sure that a skin was displayed in the Mt Spec Roadhouse for many years, though what was the true identity of the animal? If the animal was a large Tiger Quoll, you would think the spots would be a defining feature. Also, one witness did recall some spots being visible on the animal skin. Could the “faint stripes” be an artefact on the dried pelt, or perhaps some spots appeared “stripe-like” when the animal skin was pinned out? Also could the claim of the “very thick tail” also be an artefact of the skinning process?

The claim of the skin coming from a Thylacine would have to be the most unlikely in my opinion, though I can only speculate here. Thylacine stripes detailed in many photographs of preserved pelts are very prominent and would have to be a dominant, unmistakable feature I would assume. It’s also entirely possible that the skin was just that of a dog exhibiting a “faint” stripe pattern in the hair.

So now I consider, what are the possibilities of the skin coming from another animal all together? There is certainly some anecdotal historical evidence of unknown “cat-like” striped marsupials being sighting and even killed in North Queensland, with descriptions from witnesses clearly distinguishing the animal from the more commonly sighted spotted “native cat” or Quoll. I refer to descriptions of the “Striped Marsupial Cat” or the “Marsupial Tiger” which was said to have distinct stripes in the fur. Could a Marsupial Tiger skin also have spots in addition to prominent stripes? There has never been a preserved skin to prove it so we may never know, though it is also worth considering that this unknown “striped” animal could be mistaken for the Thylacine in many documented sightings. I refer to the article mentioned in Historical Account #13 describing Marsupial Tigers in the North where the animal is described to be distinctly different to the smaller spotted cats sighted in the area. The original witness also recalled a story of a striped animal which was apparently run over at neighbouring Kirrama, referred to as the “Kirrama Cat”. It was claimed that the person who ran over the animal made sure that several people saw it, and all agreed it had a cat-like face and nose. Another animal of similar description was also seen several times in the area soon after the first one was killed.

The location of the skin if it still exists will likely remain a mystery, though it may have likely been destroyed in the fire that ultimately destroyed the store. All we have now are the recollections of several people who remember the skin displaying stripes. It had certainly left a lasting impression on the first witness.

If you have any recollections of this skin or any further details on this account, please get in contact at yowietracks@yahoo.com. 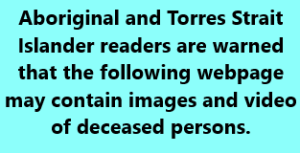